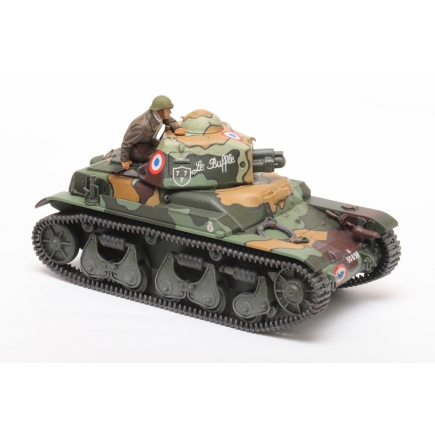 Tamiya#s French tank model kits have become well known for their unique subject matter and superb historical accuracy. This kit recreates the R35. It was originally designed as a successor to the late-WWI Renault FT, and inherited its 37mm gun, paired with a cast turret and three-piece bolted cast hull.

Around 1,500 were manufactured after its official adoption in 1935; they were one of the main pillars of the French attempt to resist the German onslaught during the Fall of France in May/June 1940.
- 1/35 scale plastic model kit. Length: 114mm, width: 55mm.
- The 37mm gun offers elevation and (as on the actual R35) 5 degrees of traverse to either side.
- Assembly type tracks allow fuss-free depiction of upper run 'sag.' They feature one-piece straight sections.
- Comes with two marking options, and a figure perched on the hatch in the turret rear.
- Color painting guide included which aids with recreation of the intricate French camouflage pattern.
5