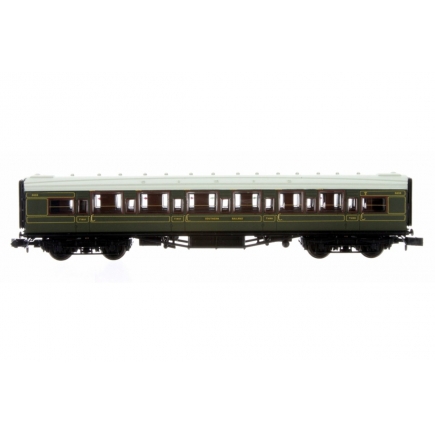 Richard Maunsell (1868-1944) spent his working life in railways, First as Chief Mechanical Engineer of The South Eastern and Chatham Railway
and then on its merger in 1923 as the Chief Mechanical Engineer of the new Southern Railway. By 1926, Maunsell had finalised his plans for a
new design of Southern coach, implementing many standard features such as buckeye couplers, standard positioning for most mechanical
and braking devices, Pullman type gangways and retractable buffers that would suit the newly formed company and its lines.

Even with this new
degree of standardisation implemented by Maunsell, four distinct body plans were developed over the following 10 years to meet the diverse typeof track and to fall within the financial constraints being faced by the business at the time. These coaches, however, were very successful and a few survive on heritage railways today.
- Finely detailed body, underframe and bogies
- Finely applied livery and decals
- Innovative `No Gap# corridor connector for super realistic running
- Light bar ready. Simply plug in a Dapol light bar for a lit coach (not the Brake Van)
- NEM coupling as standard
5