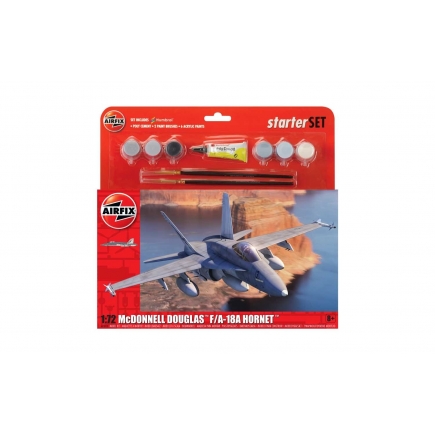 As the US Air Force upgraded their fighter capability with the introduction of the F-15 Eagle and F-16 Fighting Falcon, the US Navy and Marine Corps were looking for a new aircraft to fulfil the dual roles of fleet defender and strike platform. The resultant aircraft was another American jet classic, the McDonnell Douglas F-18 Hornet, a distinctive looking twin engined fighter which provided naval units with a significant capability upgrade. Required to operate in the demanding environment of aircraft carriers at sea, the Hornet is an extremely tough aeroplane and has proved to be effective in the roles for which it was originally intended and flexible enough to take on additional duties. Also proving itself effective and reliable in combat, the Hornet is perhaps best known as the aircraft operated by the US Navy Flight Demonstration Squadron, the #Blue Angels#, with the team flying the F-18 since November 1986. The team are regarded as one of the premier aerobatic display teams in the world and their thrilling displays of precision flying are the highlight of any Airshow in which they perform.